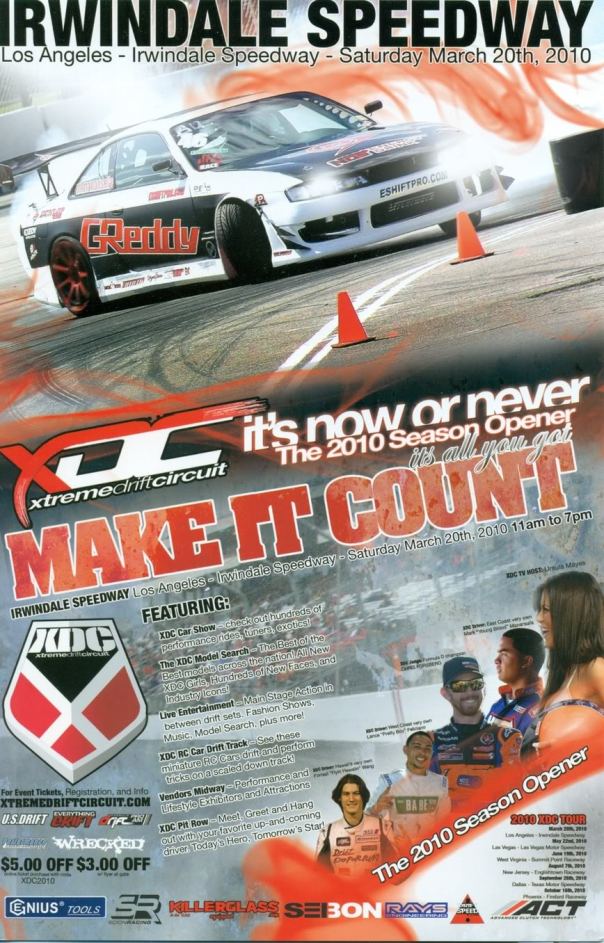 The Xtreme Drift Circuit (XDC) is the first nationwide drifting series and car show festival aimed at catering to drivers on both the professional and amateur (Pro-Am) level of competition, featuring the rising stars of the drifting world.

Irwindale marks the first event of the year for XDC, and the biggest tuner attraction in Southern California!

Toyota Speedway at Irwindale is a motorsports facility located in Irwindale, California. It features banked, paved 1/2 and 1/3 mile oval tracks. Currently titled as “The House of DRIFT” XDC will run the course with a special surprise!  Also featuring the REMIX Car Show with over 400+ vehicles competing for top honors.  All day drifting, car show, vendors midway, pit row, main stage, fashion show, model search, pre and after parties, entertainment, food, and beverages… this will be the perfect launch venue for XDC!

NonStopTuning and “Team TX” will compete in the drift competition at the first round of the XDC.  NST will be represented by Will (NST AE86) Parsons, Aaron (NST S13) Losey, and Chelsea (NST M3) DeNofa.

We hope to see a number of our friends and fans in southern California next weekend!

Posted on March 14, 2010, in Motorsports, NonStopTuning, NonStopTuning Media. Bookmark the permalink. Comments Off on NST Will Be In SoCal March 20, 2010. XDC Round 1..