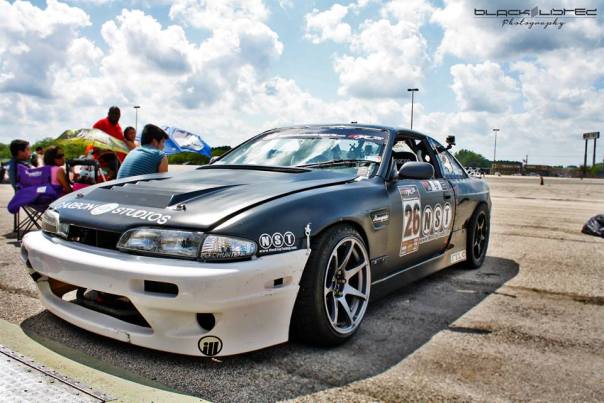 Josh McGuire and the NonStopTuning Sparky’s Speed Shop Nissan S14 wrapped up a very successful season on August 16/17, winning the 2014 Lone Star Drift championship.  The 2014 series title comes as the third ProAM championship in the last four seasons for NonStopTuning, with Chelsea DeNofa and Will Parsons winning as NST drivers in 2011 and 2012, respectively.

McGuire and his team were very well prepared all season and finished on the podium at every event, minus the final event (Round Six)  where the car suffered mechanical failure and McGuire was unable to qualify.

Even with the unfortunate DNQ at the final round, McGuire and his team had built enough of a points cushion to remain at the top of the season standings, although Dewayne Ramsey was able to close the gap and finish only three points behind, for the season title.

McGuire was one of few ProAM drivers this season to compete in multiple series, Lone Star Drift (Texas) and Vegas ProAM (Nevada) and plans to use his newly acquired Formula Drift license to drive in the FD Pro2 series in 2015.