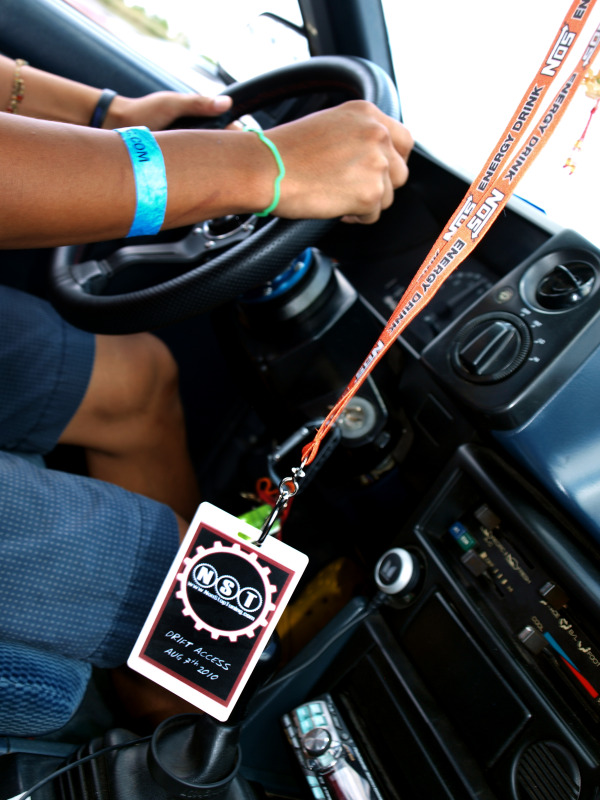 So, after the previous night’s…adventures…check out from the hotel was at noon.  Most of us checked out on time.  Haha, others a little bit later.  Huge props to Mike @ NST for hooking me up with a hotel room!  I just knew today would be…TWO THUMBS UP! 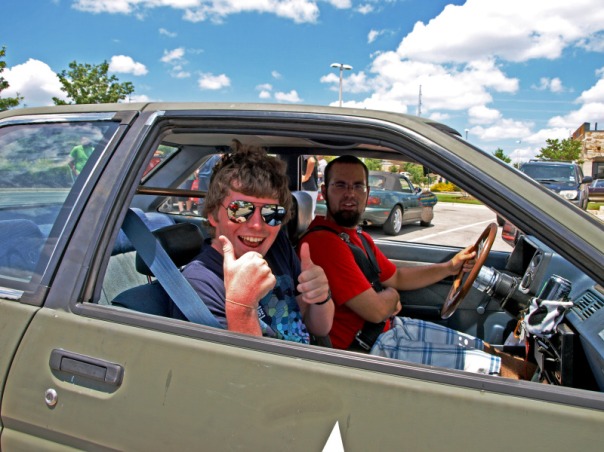 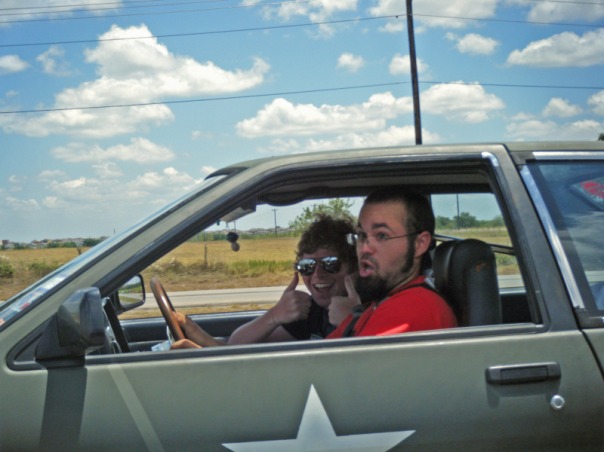 So we met up in front of the hotel and got ready to roll out.  Of course, since we were going to my family restaurant, I was to lead the way!  With Mike as my  co-pilot and my  iPod…we came across some GANGSTA songs.  Took it way back to Ginuwine’s Pony and more!  Haha.

Took the first exit where I thought there would be a big gas station.  Everyone loaded up on gas, snacks, and dranks.  Mike got some ICE CREAM!!!  But as we left, my car didn’t start.  Well…it never does.  I’ve had to push start it every time for the last two or three months.  Haha, I need to get my NST pulleys on ASAP b/c my alternator pulley is underdrive… weaksauce… (the NST pulleys will fix this problem once they’re installed).  Then Johnathan’s red coupe?  Overheated… so we chilled for a bit while he sprayed his radiator down with water.  Story of an AE86 owner’s life.  How many roll around with spare parts in their trunks and all the fluids necessary?  MANY. 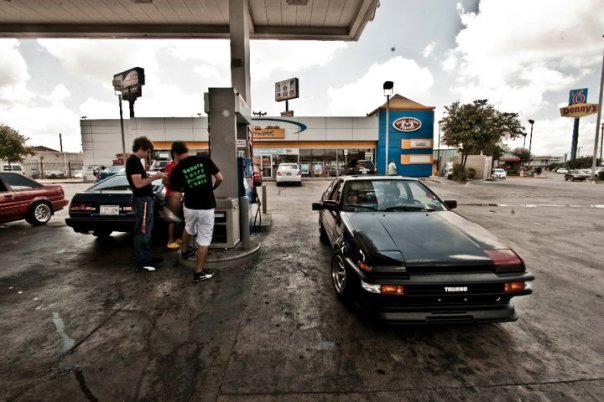 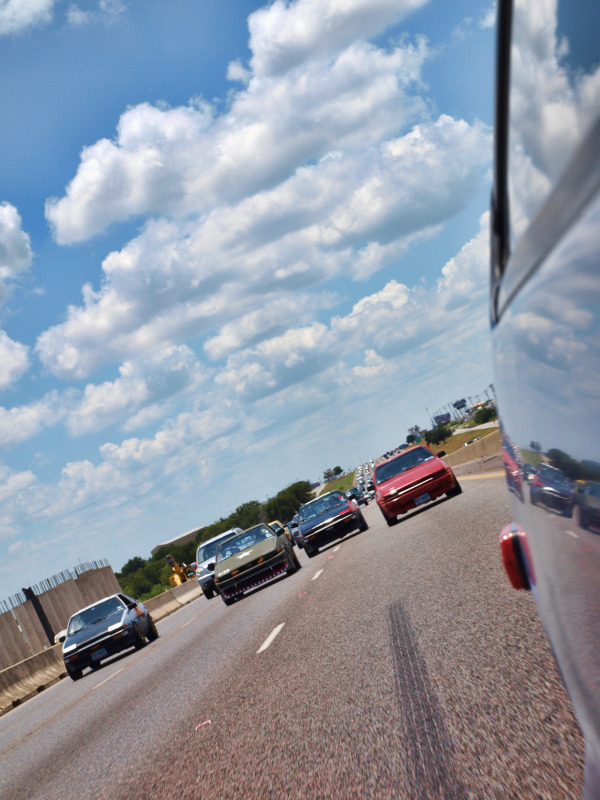 Look at the sky above! Amazing!!!

One thing I’ve noticed it…AE86 drivers really like sticking their arms/elbows out the window:

Hour and some change later, we rolled into the parking lot of Pho Thaison.  Everyone was HUNGRY for some food!  We joined up with a few AW11’s from Austin, a turbo 1st gen miata, and an XRunner!

I ran around b/c we were short-staffed… I had to work while everyone else ate.  Haha, when it died down, THEN I got to eat.  Then it was off to Lime Creek!

A pit stop at a gas station and we were on our way!

Then we met up at Lime Creek and prepared for some runs.

What is Lime Creek you may ask?  A ROAD THAT DOESN’T EXIST ANYWHERE.  Yeah…who knew Texas had roads like this, eh?  Like 4-5 miles of motorhead bliss.  Here’s a map: 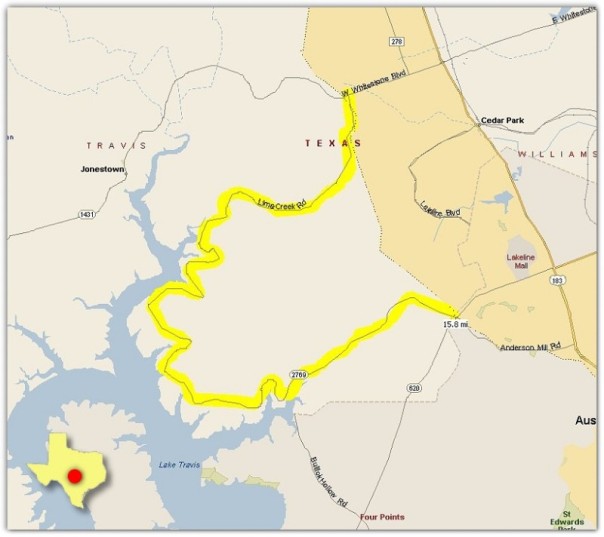 After one run, we knew we had to go again! 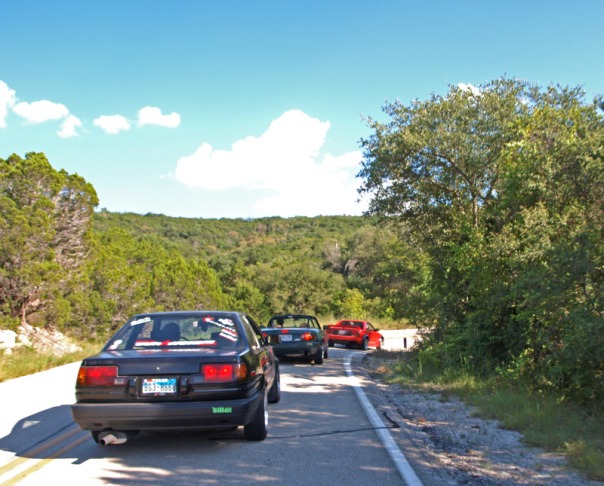 Second run…much scarier than the first.  I’ll leave it at that.  Haha.  Honestly, I can tell you that I’ve run Lime Creek quite a few times…but it still scares the living hoo-hoo out of me.  It’s the scariest road I’ve been on in my whole life.  Limestone wall on one side and edge of a cliff on the other… First timers should always be careful.  But it’s much harder in a group.  You always want to catch the person in front of you…not always the best idea, but when you’re going down Lime Creek you’ve got a lot on your mind.  Here’s me.

Yeah, many people might think I’m a wussy, but honestly, that road still scares me.  As much fun as it is 😀

We regrouped and then I headed off, I had to get to work!   Haha.  Driving into the sunset… I just thought back to the weekend….